If you've been shopping around for a bike, you may be wondering what is a BMX bike? These tough little bikes have been around since the 1970s, and kids in particular really love them. But what are they, exactly?

What Is a BMX Bike? 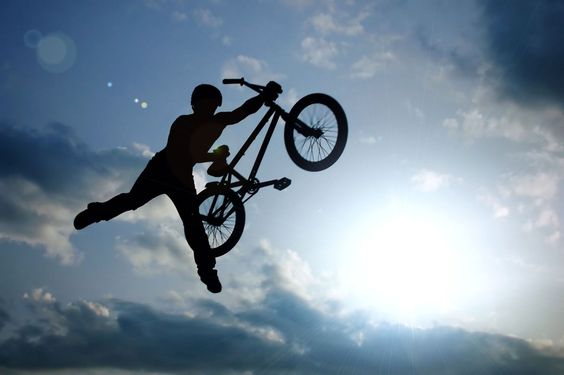 BMX bikes encompass a wide range of bikes that share similar characteristics but are different nonetheless. First off, BMX stands for "bicycle motocross," and this design boomed in the 1980s along with the popularity of racing on dirt trails.

All BMX bikes are smaller than other bikes, with a lower center of gravity. They also have simpler frames and thicker tires. Consequently, they are much easier to maneuver than standard bikes. However, they are not designed for long-distance travel.

BMX bikes typically only have one gear, although there are exceptions to this rule.

The main categories of BMX bikes are racing, freestyle, flatland, and dirt jump bikes. The type of BMX bike will determine the size and overall shape of the bike, among other things.

What is a BMX bike for racing? 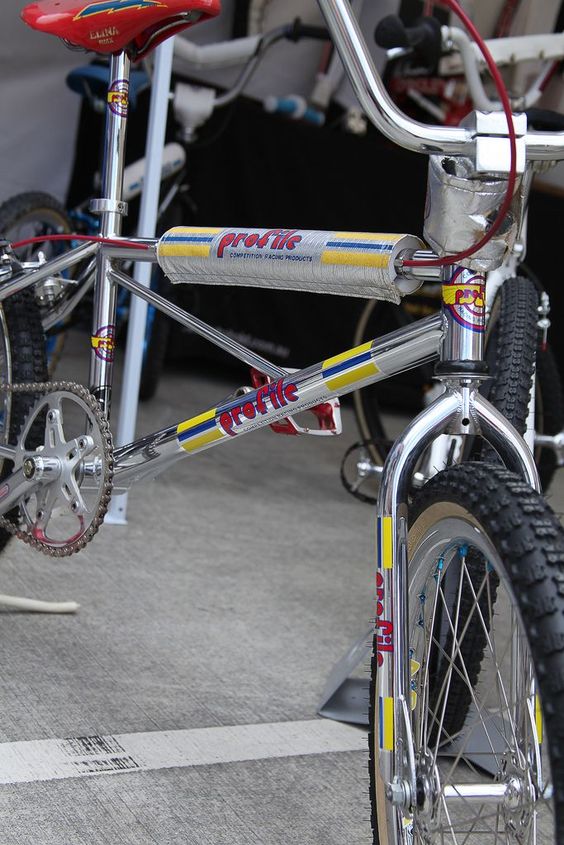 Riders use racing BMX bikes for navigating dirt tracks at high speeds. These tracks contain jumps, turns, and various other obstacles. When racing in large groups, the riders themselves are obstacles for each other. So, BMX racing can be a very dangerous sport.

These racing bikes are the non-motorized counterparts to Motorcross bikes. As such, they are very similar in structure.

The handlebars are taller than on other BMX bikes. This puts the rider in a more upright position, allowing for greater control and better line of sight when navigating the course.

The tires have just enough tread for traction, without sacrificing an unnecessary amount of speed. And due to the need for speed, racing BMX bikes are lighter than most other kinds of BMX bikes. This means better control when going over jumps.

What is a BMX bike for freestyle? 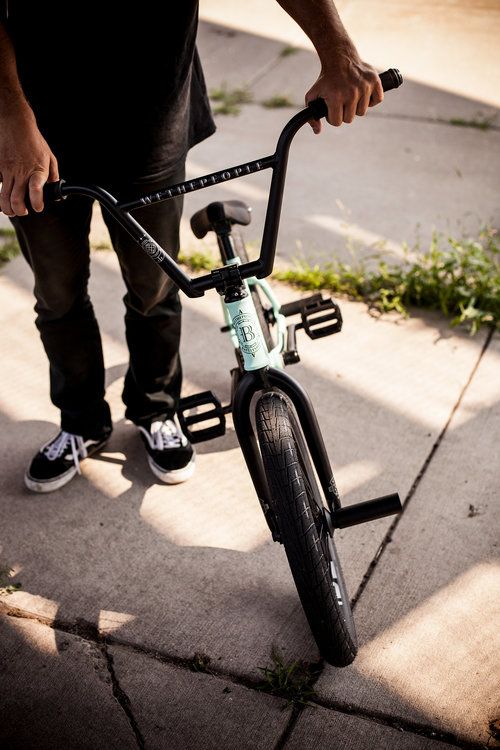 Freestyle BMX bikes are great for performing tricks such as grinds and stalls. Freestyle riding can be broken up into subcategories, including vert, street, and park riding. However, the differences between freestyle bikes are minor and more geared towards the rider's preference than anything.

Freestyle BMX bikes are heavier and stronger than other kinds of BMX bikes, as they need to be able to take a lot of abuse.

They must include both front and rear brakes for greater control over each end of the bike when doing tricks. For example, quickly rotating on the front tire may require a front brake.

The primary surfaces riders use freestyle bikes on are cement, wood, and metal, which don't have the same give as dirt does. Therefore, tires on freestyle BMX bikes are smooth.

Finally, freestyle bikes usually have pegs on the front and rear wheel hubs for performing grinds and stalls.

What is a BMX bike for flatland?

Flatland is a very special form of riding, and so it requires a special BMX bike. 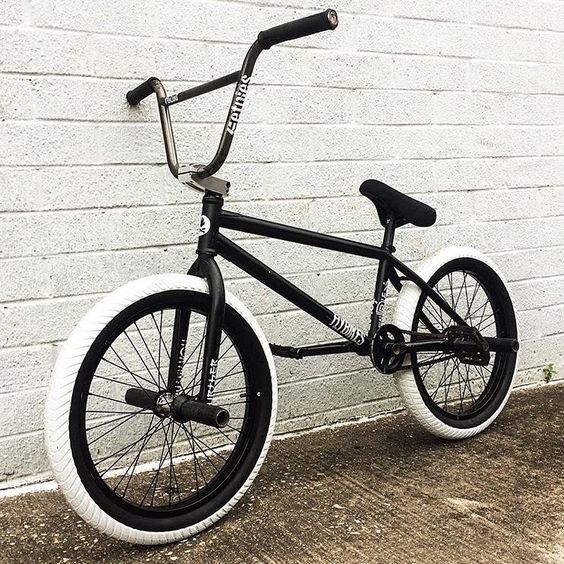 Whereas other styles center around jumps and speed, flatland is about doing tricks on the ground. These involve handlebar spins, balancing on one tire while spinning the bike, and more.

Flatland bikes have the features of a freestyle BMX bike, including smooth tires, pegs, and front and rear breaks. However, they also come with a few extras.

First, they have a much smaller frame for greater control over the frame itself. They also have something called a freecoaster hub, which allows the rear tire to rotate independently from the crank. This means the rider can spin the rear wheel without changing his or her position.

Lastly, the zero-offset fork helps to keep the bike more balanced, which is essential for flatland maneuvers.

What is a BMX bike for dirt jumps?

Dirt jump bikes are where freestyle bikes meet BMX racing bikes. The purpose of these bikes is specifically for doing air tricks on dirt courses. 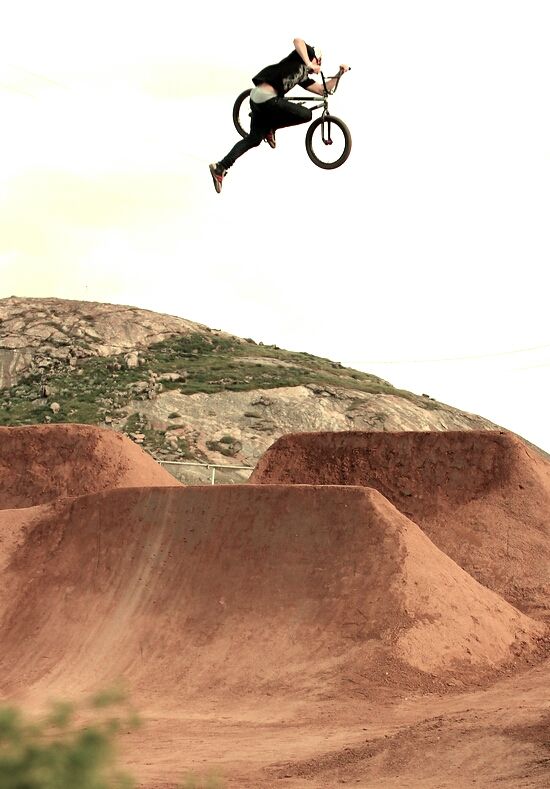 They are versatile in the sense that you can use them for a wide range of jumps. This includes a series of small to medium jumps or one large jump for maximum air.

These bikes sacrifice speed for greater traction and durability. Therefore, the tires have more tread than BMX bikes for racing. Likewise, the frame is stronger in order to take more punishment.

What Is a BMX Bike: Getting Started 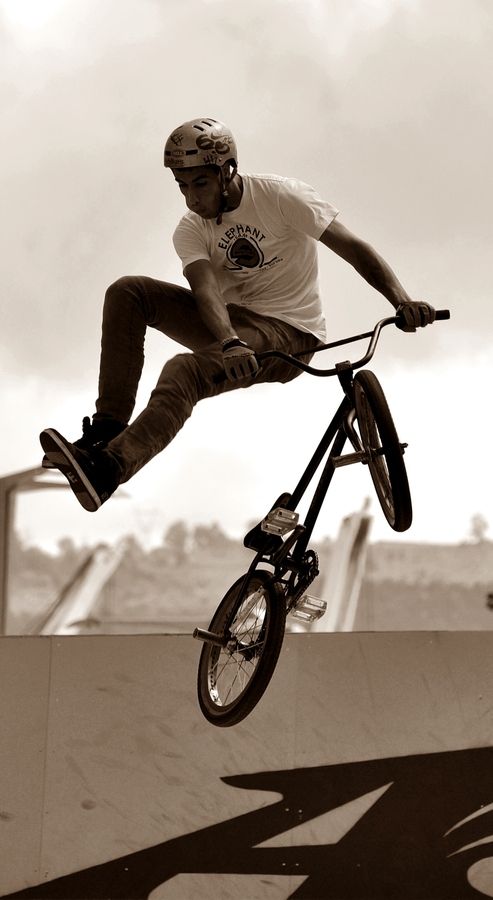 Now that we've answered the question, "what is a BMX bike?" it's time to delve deeper. You'll want a solid foundation for picking out your first bike.

When it comes to BMX bikes, popular brands are the way to go. It's not like buying generic medication or store-brand pasta, which are essentially the same thing. 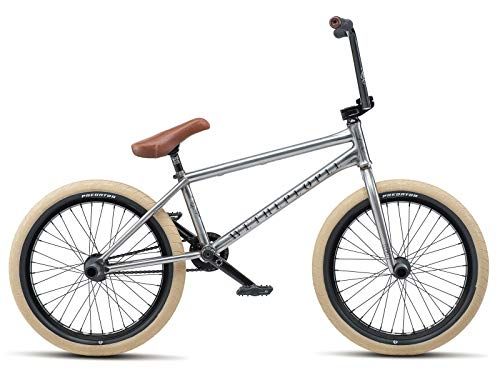 BMX brands become popular because they are trusted by experienced riders who know what they're talking about. Their bikes last longer, require less maintenance, and are safer to ride. They may be slightly more expensive. However, you will save money in the long run by not having to replace them as frequently.

Lastly, popular brands have more reviews on their products, making it easier for you to choose wisely.

There are many companies out there who produce quality products, so feel free to experiment once you have some knowledge under your belt.

For now, though, your safest bets are Eastern, Kink, WeThePeople, Moongoose, or Sunday. 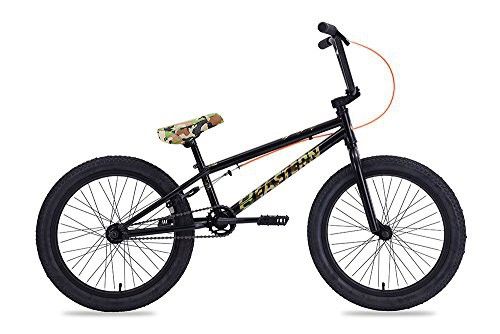 Eastern is a well-known company based out of North Carolina. They've been around for about 20 years, and have several affordable options that are great for beginners.

Kink is a small and relatively new company that has already gained a lot of respect in the BMX community. Their bikes are high quality yet affordable, strong and lightweight, making them great for freestyle riders. Additionally, Kink bikes are very stylish. 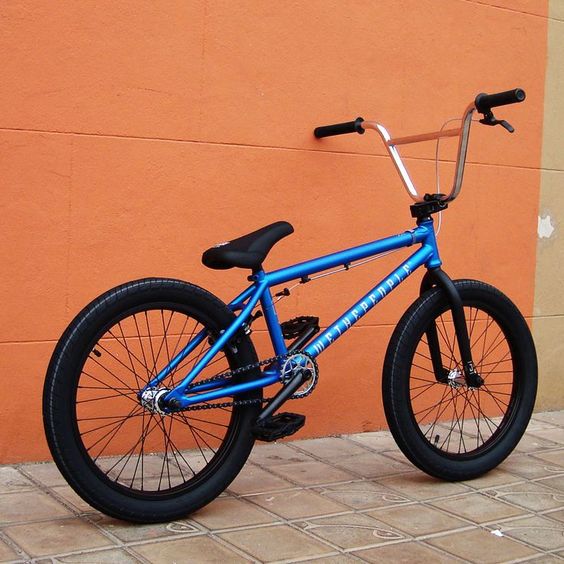 WeThePeople is one of the highest-rated brands, existing for the last 20 years or so. As far as quality and style, you can't go wrong. However, their "affordable" options are on the high end, so we don't suggest them for beginners on a budget. 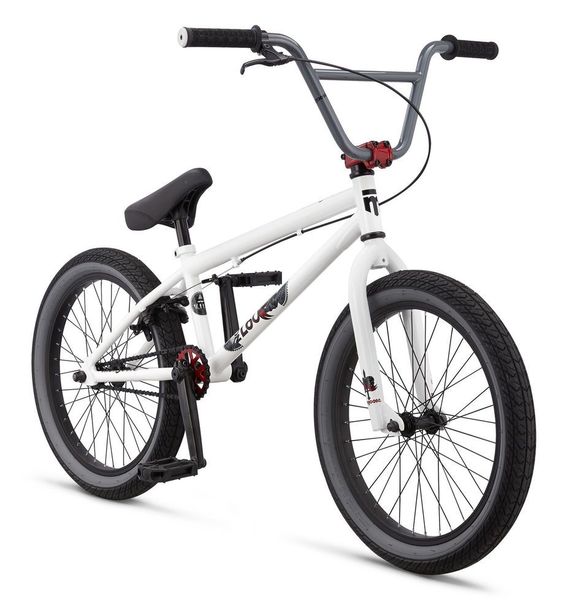 Mongoose is perhaps the most iconic brand. Many riders consider their bikes the best, while others are less fond of them. They have plenty of high-rated affordable options though, so we strongly recommend them for beginners. 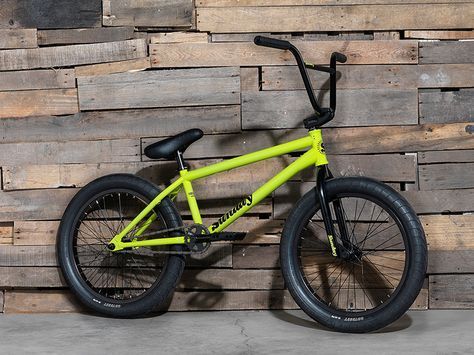 Like WeThePeople, Sunday is a great option for quality and style. Many regard them as some of the best bikes on the market. In general, they're a little on the pricy side, although they do have some cheaper models.

It may go without saying, but we'll say it anyway: 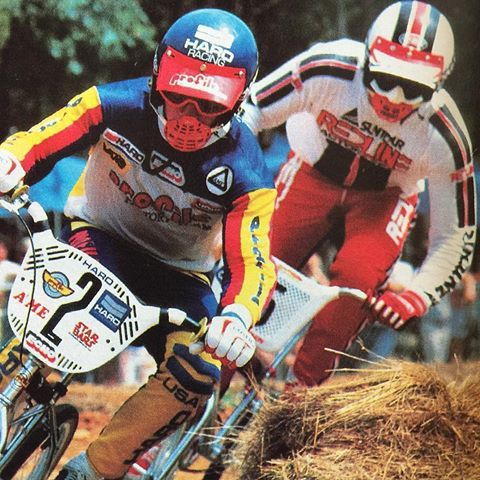 Wearing the right gear is extremely important! This is doubly true for beginners.

Not gearing up properly can quickly lead to injury. Either that, or you'll be too afraid of hurting yourself to focus on riding or pulling off tricks.

BMX racers require a full-face helmet to race. Additionally, they must either wear thick pants and long-sleeved shirts, or have shin, knee, and elbow guards. You should also wear gloves, goggles, and a chest protector.

Freestyle riders would be wise to also always wear guards. If you're worried about looking silly, think of how you'll look writhing in pain! 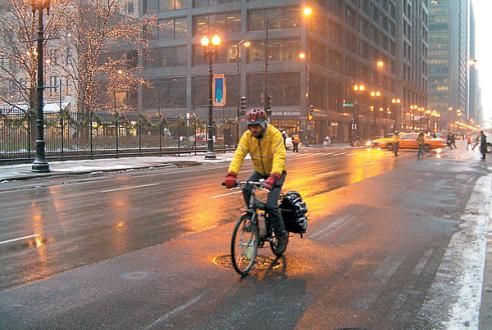 Once you've picked out a bike and all your gear, you'll want to have a couple tricks up your sleeve.

At the core of many tricks is the jay-hop, which is essentially the BMX bike equivalent of an ollie or bunny-hop. 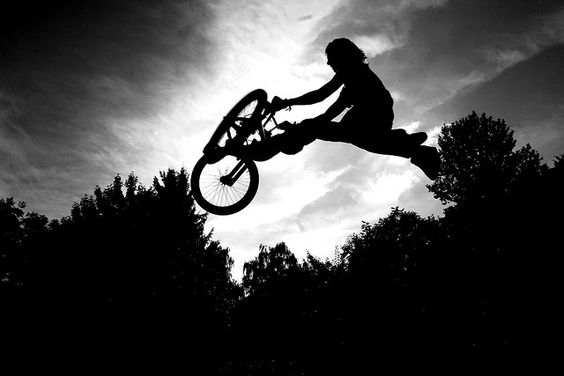 To execute this trick, first, pull up on the handlebars and lean back as you would when performing a wheelie.

With the front tire in the air, push forward rapidly. The momentum should lift your back tire off the ground.

Lift your legs and pull up simultaneously to achieve maximum height.

The fakie out is another foundation trick that you can use to learn more complicated maneuvers. 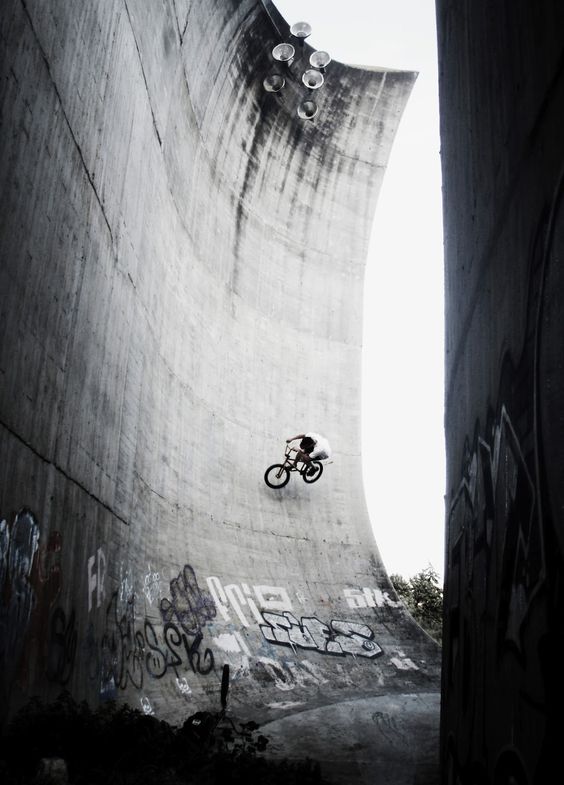 It's a simple concept but will take some time to master. Therefore you might want a friend nearby who can catch you if you fall. Just be sure not to hit them!

Start by pedaling backward enough to get some speed in that direction.

Next, turn your handlebars slightly to the left or right. Because you're going in reverse, turning them left will turn the bike right and vice versa.

Finally, lift up and put your momentum into swinging the bike 180 degrees in the direction it's turning. You should land facing directly behind where you started.

But if you practice each day, conquering one trick at a time, eventually they'll become second nature. There are hundreds of tricks to master, so take your pick!

Similarly, racing around at top speed on a dirt track with jump after jump will likely intimidate you at first. Simply start small and work your way up.

If you stay motivated, you will undoubtedly improve. 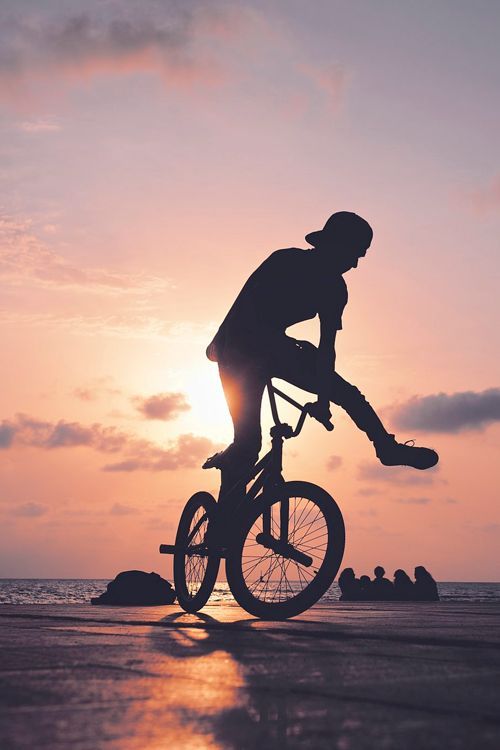 Now that we've answered the question, "what is a BMX bike?" are you ready to go out and claim the streets, parks, and tracks for your own?

Which style intrigues you the most? Which brand is your favorite and why? Tell us in the comments below!

How To Size A Mountain Bike: The Tips You Need To Know

How To Remove A Front Bike Wheel Without Quick Release

What Is A Folding Bike Tire? A Biker’s Question Answered